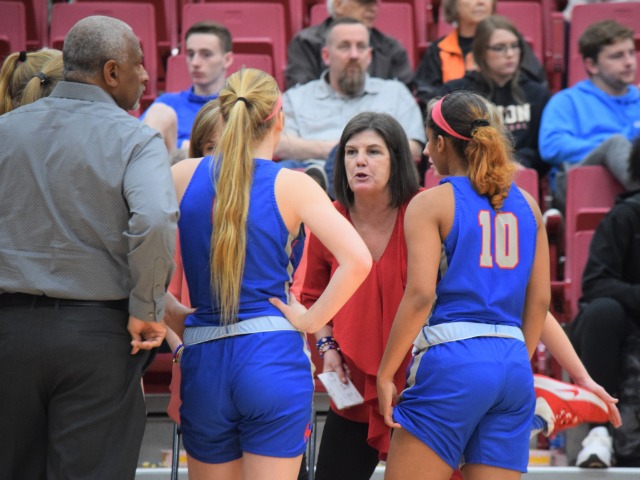 OWASSO – Battling to the final horn, Bixby’s disappointed Lady Spartans were sidelined by Ponca City, 58-54, in a Class 6A Area Tournament losers’ bracket contest at Owasso High’s gymnasium last Thursday night (March 5).
It was a battle of two evenly matched teams and the intensity displayed by both teams proved that neither was ready for the season to end. It was a game of runs – the Lady Spartans seizing the momentum in the opening half while the Lady Wildcats captured the second-half momentum. It was a game featuring big plays.
Bixby’s youthful 10th-ranked team ended the season with a 16-10 record. No. 15 Ponca City (21-6) capitalized on its second opportunity to reach state by rallying past Booker T. Washington, 68-64, in overtime here last Saturday afternoon to qualify for the Class 6A State Tournament in Tulsa this week.
Lady Spartans’ freshman guard Gracy Wernli was on fire from the outset, sinking three straight three-point shots to lift BHS to a 9-0 lead with 4:14 left in the first quarter. A trey by junior Kate Bradley gave Bixby a 12-2 lead before Ponca City came to life offensively.
A jumper by senior Deonna Owens, another three-pointer by Wernli and a drive by Bradley with one second left sparked the Lady Spartans to a 19-11 lead after one quarter.
Ponca City narrowed the gap to 19-15 early in the second quarter before Bixby senior Avery King and Bradley scored from the field and freshman Alyssa Nielsen sank a free throw giving the Lady Spartans a 24-15 lead at the 3:28 mark of the second stanza. A field goal by King and two free throws and a three-pointer by freshman Gentry Baldwin gave Bixby a 31-20 lead with 1:21 showing.
The Lady Wildcats, led by talented senior guard Baylee Fincher, went on a 5-0 run down the stretch to narrow the halftime deficit to 31-25.
Bixby’s last lead came early in the third quarter when Nielsen sank another free throw for a 32-29 Lady Spartan lead. Ponca City then reeled off nine consecutive points – four by Fincher, three by Ryley Beard and two free throws by Ashlynn Fincher to capture a 38-32 lead with 3:44 remaining in the period.
A drive by B. Fincher and three-pointer by Beard increased the lead to 43-34 with 2:22 left before Bixby rallied behind freshman post Meredith Mayes, using a free throw by Owens, a rebound bank shot by Mayes and a drive by Mayes with two seconds left to trim the deficit to 43-39 entering the final quarter.
Ponca City stretched its lead to 48-39 with 7:02 left in the game as Carlie Bradley hit a layup after a pass from B. Fincher and Beard drained another three-pointer.
A layup by B. Fincher extended the Lady Wildcats lead to 50-40 with 5:15 showing and PC led 52-42 after two Wernli free throws before Mayes converted a three-point play and scored off a rebound to make it a 52-47 game with 3:22 left.
Two free throws by Owens kept Bixby within striking distance at 55-50 with 1:08 left. Trailing 56-50 with 46 seconds left, Mayes scored from in close with 35 seconds left for a 56-52 deficit and she banked in a field goal with 13.9 seconds showing for a 56-54 game after Ponca’s Beard missed the front end of a one-and-one attempt.
Senior Karis Branstetter canned two free throws with 10.2 seconds remaining to give Ponca City a 58-54 lead. A desperate three-point attempt by Bixby’s Owens missed its mark as B. Fincher rebounded to secure the Lady Wildcats’ win.
“The third quarter they just beat us with the back door palys and picks, the things we worked on all week to try to prepare for them. I felt like we were the stronger team, we just weren’t stronger tonight,” Lady Spartan head coach Tina Thomas said.
“They really changed the dynamics when they changed to the box and one defense on Gracy. It just kind of threw out entire offense out of rhythm trying to adjust to their defense. It wasn’t that these kids didn’t work their tails off it was that we were a little off rhythm.
“Meredith really came to life in the second half and was a key factor as she’s going to be for the next three years. I was proud of their effort … we just had some mental breakdowns. We have moments of great defense but if we have a breakdown it’s a big one. We knew it would be a toss-up game.”
Wernli hit 12 first-half points to lead the Lady Spartans in scoring with 14 points. Mayes scored 13 points all in the second half. Also contributing offensively for BHS were Owens with nine, Bradley with seven, Baldwin with five, King with four and Nielsen with two.
B. Fincher, a versatile guard who was a force rebounding and passing the ball, led Ponca City with 21 points while Beard contributed 17. B. Fincher hit 24 points in the win over Booker T. Washington.
NOTES – The third quarter proved to be Bixby’s downfall as the Lady Spartans were outscored 18-8. … Of the eight teams qualifying for the Class 6A State Tournament, Bixby earned a season split with two of the teams – Edmond North and Tulsa Union. … Ponca City’s Karis Branstetter scored four points in the game, sinking four of six free throws in the final 1:14. … Bixby freshman Alyssa Nielsen wasn’t full speed and her playing time was limited as a precaution. … The future looks bright for the Lady Spartans, losing only two seniors – Avery King and Deonna Owens. Seven of the varsity players were freshmen with several seeing starting time and valuable varsity minutes this season … Contributing to Bixby’s success this season were assistant coaches Onis Pankey, Shannon Hoffmann and Caitlin Moore.