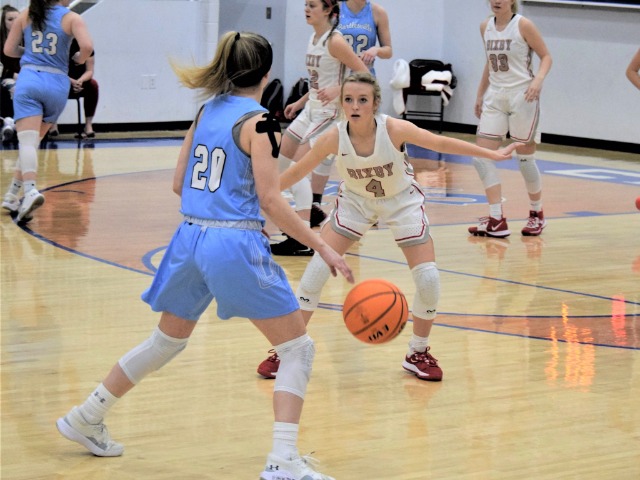 SAPULPA – Murphy’s Law was in effect here Saturday afternoon as far as Bixby’s Lady Spartans were concerned. Anything that could go wrong, did.
Seventh-ranked Sapulpa raced to a 10-0 lead and the Lady Spartans fought an uphill battle the remainder of the game in dropping a 64-37 decision to the Lady Chieftains in the Class 6A East Regional championship game in Sapulpa’s gymnasium.
Tenth-ranked Bixby (16-9) reached the regional title game after defeating Bartlesville, 47-21, in the regional opener while Sapulpa (22-3) opened with a 53-20 win over Stillwater. Both teams, however, advance to the Class 6A Area Tournament this weekend, March 5-7.
The Lady Spartans must win two games to punch their ticket to the state tourney, starting with a losers’ bracket game against Ponca City, coached by Jody Fincher, at 8 p.m. Thursday (March 5) at Owasso’s gymnasium.
Sapulpa plays top-ranked Norman in an Area Tournament winners’ bracket game Thursday at Tulsa Memorial. The Sapulpa-Norman winner advances to state.
Ponca City, 19-6 and ranked No. 15, was routed, 58-31, by Norman in a Class 6A West Regional title game at Norman last Saturday. Senior Baylee Fincher and senior Ryley Beard led the Lady Wildcats in scoring with 10 points each. Fincher and her sophomore sister, Ashlynn, play for their dad.
If the Lady Spartans survive the Area opener, they advance to meet the loser of Union-Booker T. Washington’s winner bracket game set Thursday at Owasso, starting at 6:30 p.m. The consolation finals begin at 1:30 p.m. Saturday, March 7, at Owasso.
Bixby can’t afford to spend time looking back at its disappointing loss to Sapulpa. The Lady Spartans’ season goal of reaching the state tournament remains within reach.
“They kind of stunned us, we were going to try to slow them down with the zone. Everything we practiced on and tried to stop them with … we just didn’t execute. We just didn’t get it done,” Lady Spartan head coach Tina Thomas said after the Sapulpa game. “It’s disappointing because of the way we had played, it’s just gut-wrenching for the girls.
“But we can’t hang our heads … we’ve got to get back to work to get ready for the Area Tournament when we play a good Ponca City team. It’s going to be an even battle, they’re a good team. We’ll go home and lick our wounds and by Monday we’ll be ready to go.”
Sapulpa ringleader Temira Poindexter, a 6-1 junior, ignited the early charge, scoring seven of the Lady Chieftains’ 10 opening points, while SHS’s lead increased to 16-6 after one quarter and to 40-18 by intermission. Sapulpa recorded its third win of the season over BHS by scoring in transition and off turnovers which resulted in a lofty field goal percentage.
Junior Kate Bradley led Bixby in scoring with 11 points followed by senior post Avery King, who scored 10 points. Alyssa Nielsen contributed six points, Gentry Baldwin five, Janiyah Hendricks three and Deonna Owens two. Ray Osborn hit 19 points and Poindexter 17 to pace Sapulpa.
“I thought Kate and Avery played well, they both kept their resolve and didn’t let the circumstances get in their head. The girls were ready and excited when they came here to play but when Sapulpa jumped out to the 10-point lead we didn’t recover. They couldn’t miss and we couldn’t get shots to fall.”
In the regional opener, Bixby fell behind 5-2 before going on an 8-0 run to capture an 11-5 first quarter lead against Bartlesville. Gracy Wernli scored four of the eight points while Bradley drained a three-pointer and Nielsen sank a free throw. The second quarter was sluggish and slow-paced as Bixby carried a 16-7 lead to the locker room at halftime.
The Lady Spartans caught fire early in the third quarter, going on a 13-6 run to lead 29-13 with 3:16 left in the period. Field goals by Meredith Mayes, King and Baldwin sparked a late run to give Bixby a 35-15 lead going into the final quarter.
Owens and Nielsen each scored 10 points to pace Bixby’s balanced attack in the win over the Lady Bruins. Bradley added nine points while Wernli had seven, M. Mayes 3, Jyllian Mays three and King and Baldwin each scored two points.
“We never got into any rhythm. I don’t know why but I told them we did what we needed to win and this time of the year it’s just about staying alive,” coach Thomas said after the regional opening win.
“The first half we had 16 points and 14 were from the perimeter, which shows we weren’t getting anything going inside. The defense was pretty solid tonight, it’s just that our offensive tempo, at times, was a little stagnant.”
Bixby scored five points in the second quarter while Bartlesville, which dropped a 61-45 regular season loss to Bixby on the Lady Bruins home floor, scored only two points.
NOTES – Bixby may be without the services of freshman guard Gentry Baldwin, who suffered a hand or wrist injury at the 2:36 mark of the third quarter and never returned. … Chloe Martin, Bartlesville’s leading scorer, also appeared to be battling a hand injury as she finished with two points – a pair of free throws - against the Lady Spartans. … Bixby had a four-game winning streak end in the loss to Sapulpa. … If Bixby gets past Ponca City, the Lady Spartans should feel confident against either Union or Booker T. Washington. In their last meetings, Bixby lost to No. 3 BTW (22-3) by 51-50 and defeated No. 6 Union (20-5) by 42-36 in Bixby’s Whitey Ford Field House.