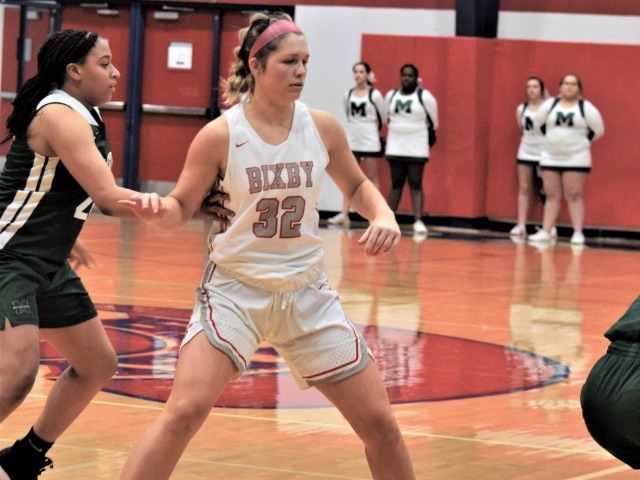 As Bixby’s 2019-20 girls’ basketball season approached, senior Avery King thought she had played her final game.
However, King, the daughter of Jana and Cary King, changed her mind a week before the season started and became a welcomed addition to the Lady Spartans team. “We needed her, and I think she needed us,” Bixby head coach Tina Thomas said of the 6-1 post player.
After expecting to be busy with other opportunities during the season, King admits she began thinking about returning. She admits missing being a part of the Lady Spartan program.
“When I stopped playing last year, I thought I was going to be a lot busier this year, but then a lot of things didn’t work out, so I knew I had some time. I really liked all the girls on the basketball team. And, I was beginning to miss it, so I thought why not try it again,” King said after a recent Senior Night victory over Muskogee.
“I heard some of the girls on the team say they really wanted me to come back … I felt wanted. Right off the bat, I felt comfortable. I wasn’t that confident at first but in my first game I play JV against Union and played well … I had like 18 points so that made me think I could help,” the personable King added.
“Every game I got more confident in what I was doing. Once I realized the coaches believed in me that’s when I thought I could do this. It’s super fun to have my teammates behind me and believing in me. I’m so glad I came back.
“It’s been totally different because so many of the players are freshmen. But they all love the game, and everyone wants to be here. It’s so fun and the energy is always so high. They all want to win … they are fierce competitors.”
King has steadily progressed this season and became a valued member, whether as a starter or off the bench. Being one of only two seniors, along with guard Deonna Owens, King’s leadership and positive attitude benefited the talented but youthful Lady Spartans.
“Not only is she a good basketball player but she’s a great role model for the younger kids with her leadership skills,” Coach Thomas added. “She leaves a positive vibe wherever she goes. She’s really worked hard and is a major contributor.
“I think it’s been a really good growth time for her. She’s gotten better and more confident … she’s great with team morale. When she decided to return, we couldn’t have been happier.”
King has become more of an offensive contributor this season and has been a force rebounding the ball. In addition, she’s assisted numerous teammates with precise passes.
She’s handled her role for the 10th-ranked Lady Spartans who closed the regular season on a three-game winning streak and enter Class 6A Regional Tournament play at Sapulpa Thursday, Feb. 27, facing Bartlesville in the regional opener.
“This season has gone by so fast. Normally, the season kind of drags on but not this season. I think we’ve improved this season. We know how to play,” King noted. “The games we’ve lost we know why we lost …we’ve made some adjustments … I feel we’re ready for the playoffs. We competed against the best and that’s made us realize we can go far if we make a few more shots and improve on the little things.”
While realizing that graduation is on the horizon, King is excited about plans for the summer that could materialize into a future opportunity.
“I’m doing an internship at Life.Church with the youth group to eventually become a youth pastor. I’ve been doing volunteer work there but it’s different being on staff. The internship will let me see what it’s like being on staff. If I enjoy being on staff then I’ll continue working my way up,” she said. “Church has always been important to me, but I’ve gotten more involved during my high school years.
“If it doesn’t work out, I’ll continue volunteering at church and go to cosmetology school. My goal is to eventually own my own hair salon.”
Family is also been important to King. Her older brother, Staton, a former standout Spartan quarterback, surprised her on Senior Night by arriving from college in time for the ceremonies. Her younger brother Chance joined the family at Senior Night.
“Staton said he had class at 3:30 p.m. and was going to try to get here by 9 p.m. We were having the National Anthem when he walked in and surprised me. That was fun … Staton is like my best friend. We’re real close,” King said.
Family influence helped spark an interest in sports for King and her siblings. Their grandfathers were professional athletes. Late grandfather Tom Borland was a College Hall of Fame and Boston Red Sox left-handed pitcher and grandfather Jim King was a former star Tulsa University and National Basketball Association basketball player. Grandpa King attended Senior Night.
“Who has two grandpas who played professionally? I guess it was natural that we went to sports,” King noted. “I think I was in high school when I understood what they had done. It was then that papa King was on the NBA video game … that was cool.
“They never really pushed sports on us which was nice. They were just really supportive of us,” added King.