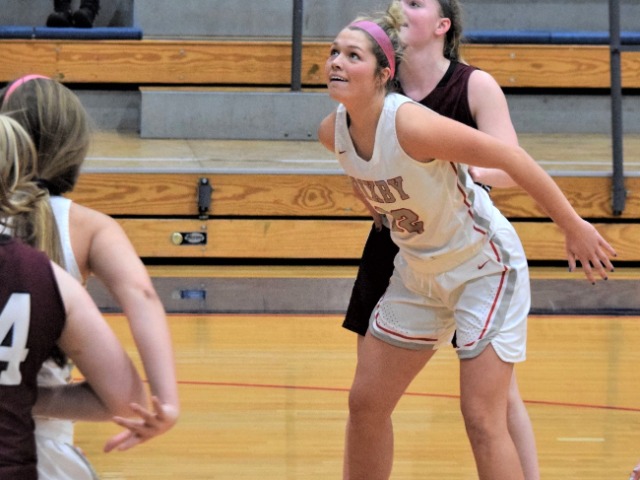 A solid defensive effort and balanced offensive performance allowed Bixby’s surging Lady Spartans to capture their fifth straight victory at Whitey Ford Field House last Tuesday, January 21.
Bixby, which moved to No. 11 in the Oklahoma Secondary Schools Activities Association’s Class 6A girls’ basketball poll, improved to 9-6 after a 57-39 romp past visiting Jenks in a Frontier Valley Conference contest.
As anticipated, Jenks displayed deadly accuracy from three-point range especially early, canning five treys in taking an 18-14 first quarter lead. “I thought we gave them too many open looks from the three-point line in the first half,” Bixby coach Tina Thomas said.
The Lady Spartans then clamped down defensively, holding the Lady Trojans to only four points in the second quarter, while cranking up their offensive tempo in claiming a 28-22 halftime lead.
A three-pointer by Bixby’s Gracy Wernli and field goals from Alyssa Nielsen, Avery King and Meredith Mayes sparked a 9-0 run giving the hosts a 23-18 lead with three minutes left in the first half.
King, who finished with a season-high nine points, controlled the paint the final 2:44 of the first half, scoring Bixby’s final five points for the six-point intermission lead. King, a senior, scored seven points during the second quarter rally.
Bixby, which only played once last week, outscored Jenks, 13-7, in the third quarter for a 41-29 lead going into the final quarter.
“Gentry (Baldwin) did a phenomenal job on their No. 14 (Makenna Burch), who is a fantastic player,” Coach Thomas said of the defensive effort turned in by the Bixby freshman. Burch led the Lady Trojans in scoring with 16 points, nine of which came in the fourth quarter. She was the only Jenks’ player scoring in double figures.
“Avery came in and got us some strong points, dominating inside. Meredith did too. All three of the posts played well. I was pleased with all of them. We fouled too much, but that was the only negative,” Thomas added. “These kids are like sponges … they are willing to do what we ask them to do. The main thing is that they just want to win and that’s really fun to work with.”
Nielsen, a freshman, finished strong, scoring eight of her game-high 18 points in the fourth quarter. King and Kate Bradley finished with nine points apiece, Deonna Owens had seven, Baldwin and Wernli with five points each and Mayes with four.
Bixby travels to Bartlesville on Tuesday, January 28, before hosting Sand Springs on Friday, January 31 on Black Out Night at Whitey Ford Field House. The girls’ games begin at 6:30 p.m.
“Hopefully, we can keep the five-game winning streak alive,” said Coach Thomas.