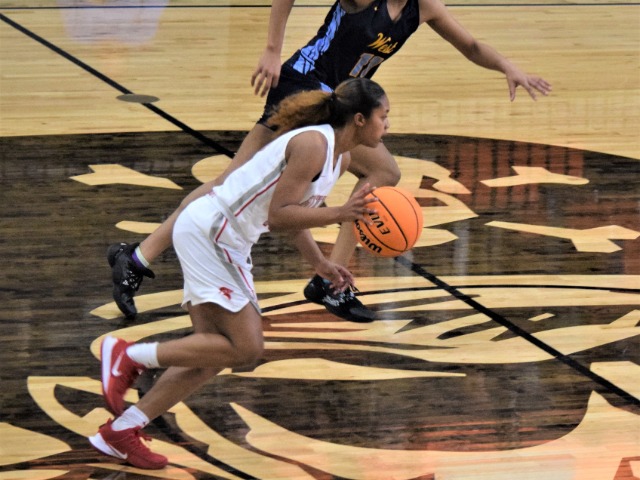 OKLAHOMA CITY – After a disappointing start, Bixby High’s girls’ basketball team returned to its winning ways in capturing the consolation championship of the Putnam City Invitational Tournament here last weekend.
No. 13 Bixby, 6-6 on the season, returns to Frontier Valley Conference play Tuesday, January 14, when it hosts Broken Arrow. The Lady Spartans visit Muskogee on Friday, January 17.
Bixby struggled in the Putnam City Tournament opener, dropping a 47-44 overtime decision to No. 16. Putnam City West. The Lady Spartans rallied to rout OKC Storm, 70-45, and upended unranked Putnam City, 64-37, in the consolation finals.
In the tourney opener, both teams struggled early to get back into a groove after the holiday break. The Lady Spartans struggled on the defensive end and with turnovers throughout but battled to force an overtime after a steal and layup by Gentry Baldwin tied the game at 41-41 at the end of regulation.
A drive by junior Janiyah Hendricks lifted Bixby to a 32-26 lead going into the fourth quarter. PC West went on an 11-3 run to build up a 37-35 lead with 4:12 left and led 41-39 with 48 seconds left before Baldwin tied the game.
A three-pointer by Baldwin lifted Bixby to a 44-43 overtime lead with 2:39 left but the Lady Patriots made the plays down the stretch while the Lady Spartans misfired from the line and afield late.
Alyssa Nielsen led the Lady Spartans with 14 points while Gracy Wernli added 13. Other BHS scorers included Hendricks with seven, Baldwin with six and Kate Bradley and Meredith Mayes with two each. Senior Zaniya Nelson hit 17 points and Sharonica Hartsfield added 16 points to pace PC West.
In the win over the OKC Storm, Baldwin led Bixby in scoring with 16 points, followed by Nielsen with 15. Hendricks added 10, Bradley nine, M. Mayes eight, Deonna Owens and Wernli with five each and Avery King with two.
In the win over Putnam City, Bradley led the way with 19 points, including five three-pointers. Hendricks and M. Mayes each contributed 11 points while Nielsen hit eight, Owens five, King four and Baldwin and Wernli three each.
Lady Spartan head coach Tina Thomas was disappointed with the lack of focus in the opener but pleased with the way the squad regrouped in the final two tourney games.
Putnam West handed Tulsa Union its first loss of the season – 47-30 – to win the tourney championship last Saturday. Hartsfield was named the tourney’s Most Valuable Player.
After games this week, Bixby returns home Tuesday, January 21, to host Jenks with the girls’ game starting at 6:30 p.m.