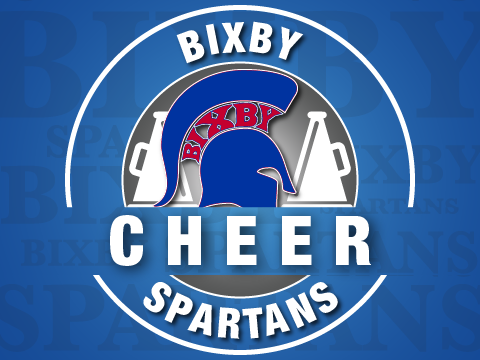 STUNT:  The Bixby Varsity STUNT Squad took to the road this past Thursday looking to defend their State Championship, in Shawnee. The State STUNT Competition was held at Oklahoma Baptist University, where the top teams in the state competed over the course of Thursday and Friday. In their opening match Bixby took care of Weatherford HS in decisive fashion, winning by a score of 21-0. Friday, they kicked off the day with a win over Blanchard HS 18-7. In the round of 8, the girls were matched up with a familiar foe in the Jenks Lady Trojans, the Bixby Squad won 18-9 sending them to the final four. In the semifinal match they had a close match with Tuttle HS and came out on top by a score of 15-10. The final  match was a repeat of the 2016 State Championship with Bixby facing off against Broken Arrow HS, who was the only team to defeat Bixby during the regular season schedule. Tied 6-6 at halftime, the Spartans showed poise and great execution in the second half of the match, and defeated BA by a final score of 17-13. Congratulations to the 2017 State Champion Bixby Spartan STUNT Squad! ~ Chelsea Wozniak, Head STUNT Coach