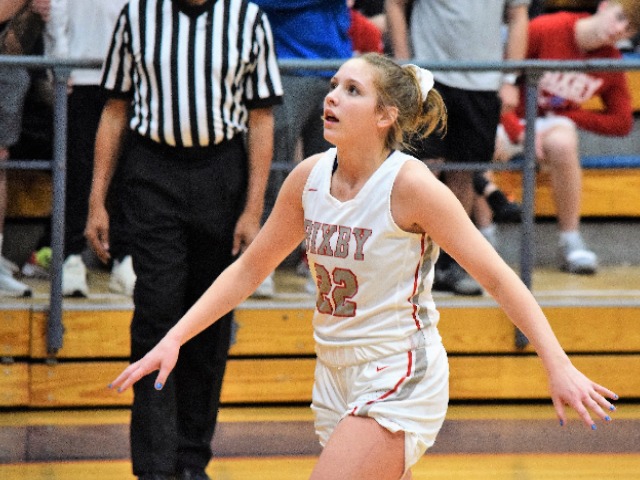 As most seniors discover - especially those involved in athletics - the final year in high school passes quickly.
That realization was evident to Bixby High senior guard Savanna Stout during last Friday’s regular season finale basketball game against Owasso in Whitey Ford Field House.
It was Senior Night at Bixby with four senior girls and one senior boy being recognized, along with their family members, in between games. It was an emotional ceremony.
“It was very emotional for me,” said Stout, who contributed nine points and played well defensively in Bixby’s one-point loss to Owasso. “It wasn’t like our season was over, but it was our last home game. It was emotional because this was my last time playing here.
“The whole thing was emotional from running onto the court during introductions to the ceremony. It’s gone by fast … the whole high school year has gone by fast. You never think about it until you experience it. The thing that kept me going was knowing I still have some time left with the girls,” she added.
“I felt good about the way I played tonight in my last game here. I’m confident in my defense, that’s what I know that I can do and know it’s a way to help my team. When coach places me on one of the other team’s best players, it’s a goal for me to not let them be the star player that game.”
“Savanna has played for me the last six years,” said Lady Spartan head coach Tina Thomas. “Her strength is her determination and willingness to be a fighter. She has helped the program immensely and has been in the trenches doing all the intangibles … on and off the court.”
Despite a disappointing end to the regular season, including two one-point home court losses at the end, Stout believes the Lady Spartans will benefit from the hustling, determined effort displayed in games down the stretch. That and the experience of playing in last year’s Class 6A State Tournament.
“We’ve been working really hard in practice and we were trying to get better in these last games to help us handle different situations next week and into the state tournament,” said Stout, the daughter of Stacy and Jeremy Stout. “These games didn’t really count since we had already been placed in a regional.
“Going through all of this helps us mature and overcome things. I think we’ll benefit more than other teams because we’ve experienced going to state.”
Bixby meets talented Mustang in the Class 6A Regional Tournament opener at 6:30 p.m. Thursday, Feb. 21, in Moore High’s gymnasium. The No. 13-ranked Lady Broncos are 16-7 this season. The Lady Spartans understand the challenge ahead since a loss in this game ends the season.
“I’ve heard they have a couple of good players on the team … we’ve heard they’re a good team,” said Stout. “We know they’re not going to be an easy team to defeat. It’s a two-hour drive so we’re going to have to have a good mindset.”
When she graduates, Stout plans to attend the University of Oklahoman and study nursing. Her basketball career will end when the Lady Spartans’ season ends.
“I’m not going to do any basketball after this season, I’m just going to concentrate on school. It will be tough to leave basketball behind, that’ll be a change for me,” she said. “I’ve always thought about nursing. I just have a good feeling helping people. I love helping people ... I think that’s where I’ve been called by God.”
Stout, who attended schools in Bixby from elementary through high school, played soccer and basketball as a youngster before giving up soccer in favor of basketball in the seventh grade. Her older sister, Sydney, a standout in basketball and track at Bixby where she graduated in 2016, was a role model.
“When I decided to stick with basketball she was a lot of the reason I wanted to concentrate on basketball,” Savanna said of Sydney, a 6-0 forward on the University of Arkansas women’s basketball team. “She’s been a great role model, watching her play here and now playing college basketball at Arkansas.”
Basketball has been a passion for the Stout girls. Giving it up will be tough for Savanna. She and the Lady Spartans, however, expect to extend this season for a few more weeks.