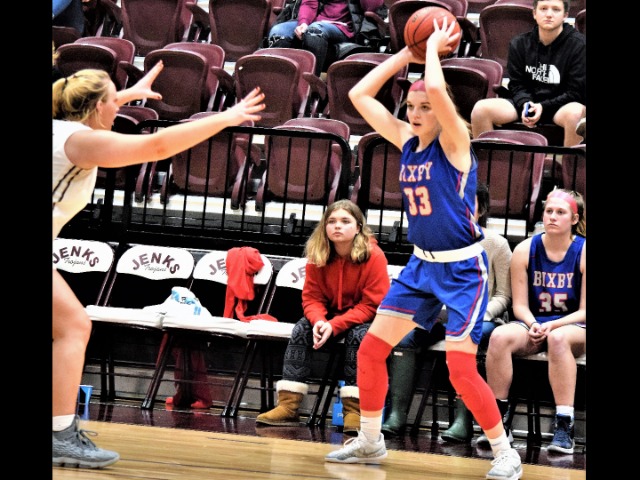 When she began playing competitive athletics, Bixby High senior Sydney Page spent most of her time on soccer fields. Soccer was her first love.
As an eighth grader, Page also began playing basketball. It didn’t take long for basketball to become her passion, as evidenced by her unselfish, determined contributions as a senior leader for the Lady Spartans.
“I grew up in Union and moved to Bixby in the eighth grade. When I moved to Bixby I was a little more interested in soccer because I played soccer more than basketball. Slowly, basketball took over and I began loving playing basketball,” said Page, the daughter of Steve and Debby Page.
She hasn’t played soccer since her sophomore season but competed in track for the Lady Spartans last season and experienced enough success that she plans to compete again this season.
“Coach Pankey (Onis, assistant girls’ basketball coach) talked me into going out for track last year since he was the track coach. He said it would help my speed and said it would help my confidence doing something that I hadn’t done before,” Page said.
“He had me jumping over some hurdles a day before the meet, liked what he saw so he told me I was running hurdles the next day. I came in third in my heat of the 100-meter hurdles and I almost went to state in the 300 hurdles. That was an accomplishment for me since I’d never done that before.
“That experience definitely helped my confidence and it’s carried over to this year because I’m more comfortable playing basketball.”
Page, who is averaging almost seven points a game, sees improvement in her play during her career with the Lady Spartans, beginning when she played for current girls’ head coach Tina Thomas in the eighth grade.
“I think my defense has gotten better since my freshman year. Coach Thomas pretty well ingrained that into us. It’s not as fun as offense but it’s definitely needed. I love rebounding, too. It’s just a great feeling, grabbing a rebound and giving a teammate another chance to score. Scoring is always fun but rebounding and assisting are important for a team.”
Page, who carries a 3.86 grade point average, has accepted her role on the Lady Spartan team and understood the need to contribute offensively during a hard-fought, three-point loss at Jenks last Tuesday. She scored seven of her nine points in a fourth quarter rally and launched a possible game-tying three-pointer at the final buzzer, which went in before bouncing out.
“I definitely thought the shot was going down … I thought it was in,” Page said. “All I could hear was my dad yelling ‘shoot the three.’ I couldn’t believe it bounced out. It was a tough loss, but I think it was a good game to play going into the playoffs because it showed us how to battle back.”
That experience along with qualifying for last year’s Class 6A State Tournament should provide motivation for the Lady Spartans, who end the regular season with home games this week against Sand Springs and Owasso.
“This year has gone by so fast … it’s flown by,” she said. “I feel really good about our chances since we got so far last year. I think that’s going to motivate us. Going to state last year was one of the coolest things. I didn’t play as much as I am this year, but I loved the comradery. It was amazing.
“It’s definitely helped me this year, seeing how comradery helps us. For us to be successful we need to be playing as a team and not individually.”
Page’s contributions to team chemistry haven’t gone unnoticed by her head coach. “In addition to her being an outstanding player, Sydney has demonstrated excellence in academics and leadership,” Coach Thomas said. “She helped run every clinic and camp for our youth program since her eighth-grade year. She has been a dedicated and committed player. I’m confident she will go on to do great things in her future.”
When she graduates, Page plans to attend Oklahoma State with an interest in advertising and marketing.
“My mom is in marketing at ORU (Oral Roberts University). I’ve been at her work before and really enjoyed it. I thought that was something I’d like to do,” Page said. “I’ve gotten a couple of scholarships to OSU so that’s my plan.”
For now, however, Page’s plan is to successfully conquer the hurdles she and the Lady Spartans encounter in the upcoming state playoffs and the upcoming track season.