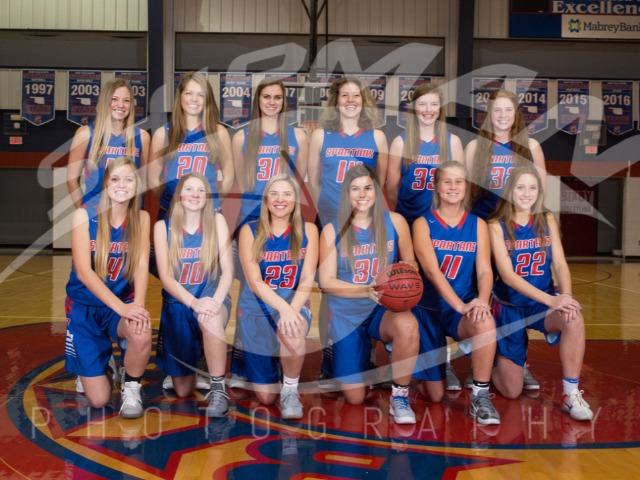 The Lady Spartans took improvement steps during each game of the recent Sapulpa Holiday Classic, capped off by an impressive 63-51 victory over Greenwood, Ark., in the consolation championship game last Friday afternoon.

Numerous players made significant contributions during the tourney.

Bixby, 7-2 on the season, returns to tournament play Thursday, Jan. 4, in the Putnam City Invitational at Putnam North High’s gymnasium. The Lady Spartans play PC North at 5:30 p.m. in the tourney opener.

The Lady Spartans opened the Sapulpa tourney with a 49-45 loss to Midwest City but regrouped to defeat Broken Arrow, 51-41, to reach the consolation finals.

“This year, we’re striving for excellence, that’s our motto. It doesn’t matter what’s going on around us we’re striving to get better every game,” said Bixby head coach Tina Thomas. “I’m very pleased with their spirit and determination to get better.”

Midwest City, which lost in overtime to Sapulpa in the third-place game, led Bixby, 38-27, going into the final quarter.

The Lady Bombers were on top, 41-29, before Bixby scored nine straight points – five by Savanna Stout – to trim the gap to 41-38 and when Sydnee Schovanec scored fourth consecutive points the Lady Spartans tied the game at 42-all.

Against Broken Arrow, Bixby led 24-12 at halftime and the Lady Spartans maintained control throughout but were unable to separate until late in the game because of the hot-shooting of BA guard Kinsey Callen, who hit 15 of her 24 points in the second half on five treys.

The Lady Spartans turned in their finest performance against Greenwood, 7-7 on the season. Bixby battled to a 14-12 first quarter lead while Greenwood scored the final three points of the first half to tie the game at 29-all.

Trailing 31-29 early in the third period, Bixby reeled off nine straight points to take a 38-31 lead with 4:24 showing. Schovanec hit four points, Myles drained a three-pointer and Bittle scored on a layup during the surge.

With the game tied 42-all early in the final quarter, Bixby scored 13 consecutive points for a 55-42 lead with four minutes remaining in the game. Stout started the rally with a three-pointer while Bittle contributed eight points and Myles sank two free throws.

Bittle, an all-tournament selection, led Bixby in scoring with 26 points, including 12 points in the final five plus minutes of the game. Myles scored 12, followed by Schovanec with seven, Stout six, Williams five, Tyree three, Brown two and Page two. Bradley missed the game because of illness.

“I thought the girls were ready to play today. We had a little trouble getting into our offense early because of their pressure. They’re a well-coached team and kept pressure on us. I’m glad we had the opportunity to work against that pressure,” Coach Thomas said of Greenwood.

“Mattie did an extremely good job for us today. We tried to spread them out and were able to get some drives to the basket,” Coach Thomas added. “We’re getting solid minutes from our bench that really helps … sometimes a bench player leads us in scoring. We have good depth, I feel we can go 10 players deep.”